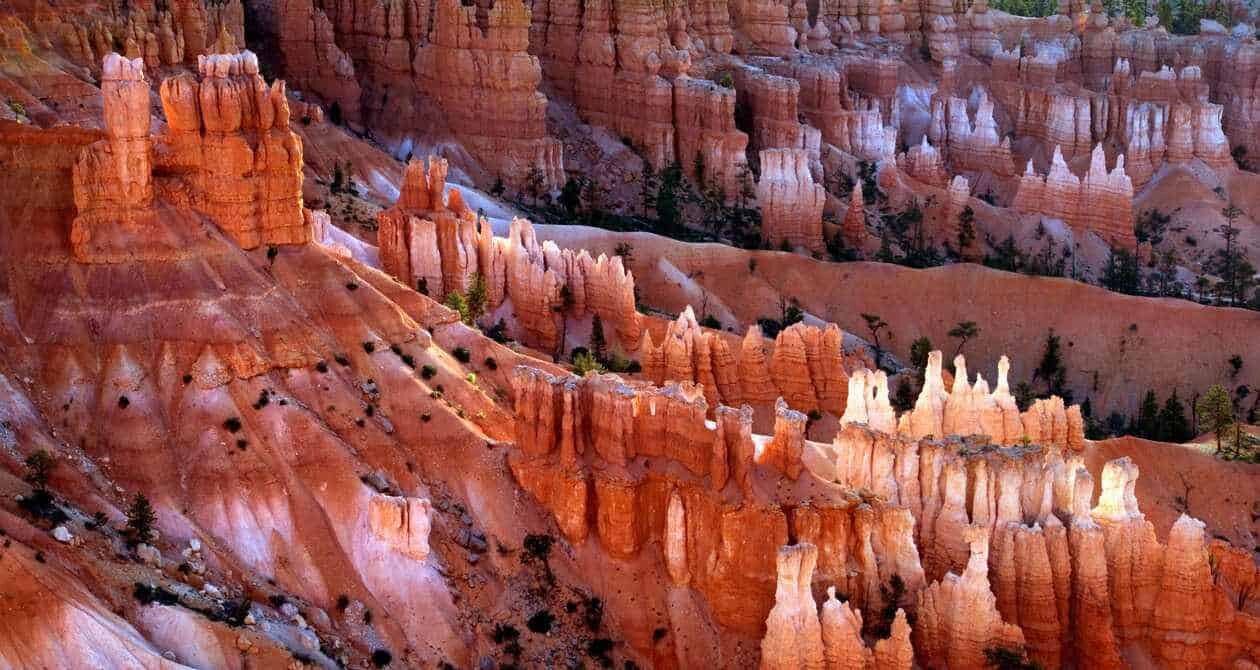 Bryce Canyon is not a canyon. It is the spectacular edge of the Paunsaugunt Plateau, a place where intricately carved towers and arches of stone shimmer in a dazzling array of color under the bright sun.  The state of Utah in the United States is home to many beautiful National Parks, and Bryce Canyon National Park ranks as one of the most magnificent and awe-inspiring.  15 million years ago the earth in this region began to shift, forming a series of plateaus. The Paunsaugunt is an extensive plateau, with the Paria River gradually eroding away the edge to form Bryce Canyon.

The rock in Bryce Canyon is composed of layer after layer of sediment deposits, deposited millions of years ago when the area was at the bottom of a lake. Now the Paria River has exposed the layers, allowing a detailed history of the lake to be determined.  The Park itself was established in 1924 and was named after an early settler in the area, Ebenezer Bryce. He emigrated from Scotland, married a local girl then moved southwards in stages, building sawmills as he went.

In the mid-1870s, he reached the Paria River, where he and his family settled for a number of years. It was at this time that Bryce made his immortal comment about Bryce Canyon – he called it “one hell of a place to lose a cow”.

The area remained basically undiscovered by European tourists, the first guest houses only being constructed around the time when the park was officially established.  Luckily this has led to Bryce Canyon being an area of largely unspoiled beauty, as well as the enormous scientific value of the historic information trapped in its pinnacles and spires.

The canyon is by no means a stagnant place – the rim recedes by an average of about a foot every 50 years, and in this ever-changing scene, it is water that plays the most vital role in the shaping and eventual destruction of the magnificent scenery.  Because the rock was laid down in layers, there is a variation in the hardness of the rock formed. When water runoff trickles across the rock, some areas erode rapidly whereas others hold firm.

This variation in erosion speed causes the formation of pinnacles, or “hoodoos” of stable rock. In some places, the water seeps down through cracks and eats out holes beneath the surface. When the side rock erodes away, an archway is left behind.  Eventually, the arch collapses, leaving two more pillars to join the rest. The ever-changing vista of colors, spires, walls, and archways is spectacular at any season, and the park is open all year round.

In the warmer months, there are plenty of trails for the visitor to explore, ranging from easy strolls to hard hikes. Some of the best trails are located in the Bryce Amphitheatre, located near the entry to the park.  Here you can wander through the Queen’s Garden, or gaze up at Queen Victoria herself surveying the ‘flowers’ in her garden. Some of the most awe-inspiring lookouts are situated in this area, including Sunset Point and Inspiration Point – a must for any visitor.

Walkers can also follow the Fairyland, Riggs Spring and Under-the-Rim trails, which are longer but allow more opportunities to see the different elements of the park at close quarters.  Summer months can cause temperatures in the base of the canyon to soar, so it is very important to be prepared for the heat and carry plenty of water.

In winter the roads are opened between snowfalls, allowing a totally different perspective of the park. Snow-capped pinnacles stand out sharply against the background of white snow and dark green trees. The air is also cleaner, allowing visitors to see great distances.  For the energetic, it is possible to cross-country ski in a number of areas in the park, and on some trails, it is possible to go snowshoeing instead of hiking.

If you want a slightly different view of the park, it is possible to explore the park in a 1930 limousine. Alternatively, you can rent a horse on an hourly basis to trek some of the better trails.  There is plenty of interest to explore in the park, apart from the marvelous scenery of the ‘silent city’, as the hoodoos are sometimes called. The park also contains a large variety of plants and wildlife, including meadows and forests.

Ground squirrels abound near the viewing areas, and their antics are almost enough to distract the visitor’s eyes from the scenery. On quiet mornings and evenings, it is also possible to see deer, elk and antelope grazing on the meadows.  Some bears and mountain lions also enter the park occasionally, but, are rarely seen by tourists.

Bryce Canyon is a hidden jewel, thoroughly deserving to be as well known as its southern neighbor, the Grand Canyon. Include it on your itinerary, and you definitely won’t be disappointed.  In fact, you may be completely overwhelmed by the fascinating and awe-inspiring beauty of Bryce Canyon, just like almost every other visitor.

Free Wi-Fi, cable TV and free parking are top perks at Bryce View Lodge, a quick shuttle ride from Bryce Canyon National Park. The two-story lodge has 160 rooms, some designated non-smoking, which come with coffeemakers, cable TV and free Wi-Fi. Pets are welcome. Guests have several dining options across the street from the hotel including a steakhouse, a diner and a bar and grill with live Western entertainment. Guests may use the indoor and outdoor pools and hot tubs at the hotel’s sister property across the street. Hotel amenities include fax/photocopy service, an ATM and free parking. Located on Highway 63, the hotel overlooks Bryce Canyon National Park from its setting on a plateau at the edge of a pine forest. Souvenir shopping at Ruby’s General Store is within an easy five-minute walk. Ruby’s Art Gallery, across the street, focuses on American West art and collectibles. The shuttle to Bryce Canyon National Park, free with purchase of a park entrance pass, picks up guests at the lodge entrance for the quick trip to the visitors center, where other shuttles go to the viewpoints. The lodge is two miles from Bryce Canyon Airport.

Our guests give high ratings to the Best Western Plus Bryce Canyon Grand Hotel because of its comfortable rooms, a yummy free hot breakfast and a spectacular location. The non-smoking hotel has 164 rooms in two four-story buildings. Each room comes with a desk, microwave, refrigerator, coffeemaker, AM/FM clock radio and flat-panel TV. Wi-Fi and local calls are free. The hotel’s enclosed outdoor courtyard offers privacy for hot tub and patio areas. Fuel up each morning with a free full hot breakfast, and work out in the 24-hour fitness room. The hotel provides a business center, a 24-hour front desk, concierge services, a guest laundromat and free parking. Within a five-minute walk of the hotel, guests can arrange horseback rides and ATV tours of Bryce Canyon National Park, approximately one mile away. Scenic flights by helicopter and plane depart five miles away. Restaurants and shops in Bryce Canyon City are a 10-minute walk. Bryce Canyon Airport is a five-mile drive. Cedar City Regional Airport is a 90-mile drive.