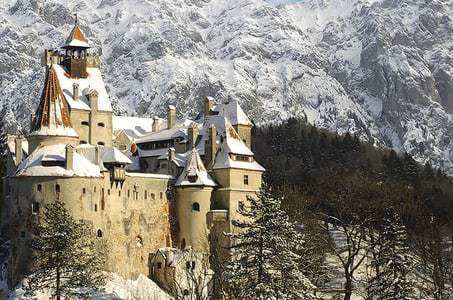 The Teutonic Knights – “Ordo domus Mariae Sanctae Theutonicorum Hierosolimitanorum” – a catholic religious order formed in Palestine during the late twelfth century by German crusaders, received Țara Bârsei (“Terra Borza” or “Burzenland” – a country named after the Cuman tribe of Burci) from King Andrew II of Hungary. The purpose of this gift was to establish the Teutons in the area and to defend the Southeastern border of Transylvania from the Cumans and the Pechenegs.

The Teutons erected a fortress in Bran (a Turkish name meaning “gate”), before they were driven away from the area in 1226. On November 19, the office of the Hungarian King Louis the Great – Louis I of Anjou – issued a document granting to the people of Brasov (“Kronstadt” – The Crown’s City) the privilege of building a castle. Through this document, the Saxons of Transylvania (“Sachsen” – a population of German origin that came to Transylvania in the twelfth century), from the region encompassing Brasov, were urged to participate in the building of Bran Castle, which was previously named “Dietrichstein” or “Törzburg” in German, “Törcsvár” in Hungarian, and “Turciu” in Romanian.

In 1388, the castle’s construction was complete. The Castle was built on a steep cliff between Măgura and Dealul Cetăţii (“fortified town’s hill”), with an exceptional view of the nearby hills, Moeciu Valley and Valea Bârsei. It served the role of customs – holding 3% of goods transferring in and out of Transylvania – and the role of a fortress – the castle stood at the Eastern border of Transylvania and was used in an attempt to stop the Ottoman Empire’s expansion. The castle was inhabited by professional soldiers, mercenaries, and the storyteller Ioan de Târnava, wrote about “the English brigands and ballista soldiers” of the fifteenth century. The lord of the castle was elected by the King, usually from among the Saxons, and whose role was increasingly important in the history of Transylvania. By the end of the fifteenth century, the castle’s commander also held the title of Vice-Voivode of Transylvania. The Castle was given as fief (“property given in return for loyalty”) by Sigismund of Luxembourg to his ally, Prince Mircea, the Elder of Wallachia, where he could escape to in case of an attack by the Turks. After the death of the Romanian Prince in 1419, due to the political instability of Wallachia, Sigismund took over the castle and entrusted it to the Princes of Transylvania. The Turks raided Transylvania, but John Hunyadi (Iancu de Hunedoara) defeated them in Bran. Iancu, Prince of Transylvania, who needed the support of the Saxons at the border, reinforced the promises granted to the inhabitants of Brasov by Mircea the Elder and by Sigismund. Vlad the Impaler (Vlad Tepes) was allied with Bran and Brasov during his first reign (1448) and through the start of his next reign, after the Princes of Transylvania requested that he handle the anti-Ottoman resistance at the border. During his second reign (1456 – 1462), however, his army passed through Bran in early 1459 to attack Brasov, in order to settle a conflict between the Wallachia Voivode and the Saxons, who requested higher customs taxes and supported his opponent for the throne. Vlad the Impaler burned the city’s suburbs and murdered hundreds of Saxons from Transylvania, provoking the Saxon community to seek revenge by later mentioning in reports that the Voivode were a tyrant and extremely ruthless.

On January 01, the Saxons of Brasov purchased the right to use the castle for 10 years, for 1000 florins, from King Vladislav II Jagello. The King’s treasury was previously emptied from war expenses. The Brasovs also took on the castle’s money-making customs role as part of the lease. After extending the castle’s lease with the Princes of Transylvania several times – even after the Ottoman conquest of the Hungarian kingdom in 1541 – Brasov managed on April 25, 1651 to sell the castle to George II Rackoczi.

Although Transylvania became part of the Habsburg Empire since 1687, the promises offered by the Princes of Transylvania, including the 1651 sale of the castle, were reconfirmed by the Leopold Diploma.
In 1723, renovation was completed on the northern tower of the castle, as mentioned in an inscription. The Castle was damaged over time, often by sieges and otherwise by common negligence or even by forces of nature. For example, in 1593 there was an explosion on the powder mill and in 1617 a severe storm destroyed the roofs. The castle also underwent reconstruction during the reign of Gabriel Bethlen (1613 – 1629), when the gate’s tower, the round tower and the donjon were all renovated. By 1836, Bran Castle lost its military and commercial importance, after the border between Transylvania and Wallachia was moved to the mountains, at Pajura. Although Bran ceased to be a border and customs point of Austro-Hungary, the castle continued to be an administrative seat. Between 1883 and 1886, the imperial authorities agreed, at the insistence of the Brasov inhabitants, to repair damages made to the castle during the Revolution of 1848 and during the Russo-Turkish war of 1877. Extensive restoration work was carried out.
The City Administration of Brasov transferred the castle to the region’s forestry. For 30 years, the castle fell into decay – it was inhabited, up to 1918, by the foresters, woodsmen and forest inspectors coming from Brasov.

After 1918, Transylvania became part of Greater Romania. On December 1st 1920, the citizens of Brasov, through a unanimous decision of the city’s council, led by Mayor Karl Schnell, offered the castle to Queen Maria of Romania, who was described in the deed as “the great queen who (…) spreads her blessing everywhere she walked, thus wining, with an irresistible momentum, the hearts of the entire country’s population”.

The Castle became a favorite residence of Queen Maria, who restored and arranged it to be used as a residence of the royal family. From 1920 until 1932, the Castle was converted into a royal summer residence, coordinated by the Czech architect Karen Liman, who designed the castles Peles and Pelisor. The 57 meter deep well of the castle gave insufficient water; therefore water was piped to the castle from natural springs situated across the valley. In 1932, the castle added a hydroelectric power plant on the stream Turcu, to light the castle but was also connected to the towns of Bran, Simon and Moeciu. The grateful inhabitants thanked Queen Marie, to which she referred in her writings: “poor villages, pure Romanian that in a near future would not have had this advantage.”

The area around the Castle was turned into an English Park with two ponds and a Tea House. An elevator was installed into the well shaft to provide easy access between the castle and the park for the Queen suffering from arthritis. Other buildings were erected: a guesthouse, a wooden church, staff housing, stables and garage.

When Queen Marie died, on July 18, Bran Castle was bequeathed to the Princess Ileana, now married to Archduke Anton of Austria since 1931. The Queen’s favourite, according to a statement from Balchik on June 29, 1933. The Archduchess continued the planning for the castle’s future. After the Vienna Award, when Romania lost the South Danube territories, Queen Marie’s heart that had been in the Stella Maris chapel of the Balchik’s palace on the Black Sea, was brought in its sarcophagus to Bran. The sarcophagus containing the heart was placed into a crypt chapel carved into the rock across the valley from the Castle. Upon Queen’s death, her heart had been placed in a silver box that was placed into a precious ornate box, which were then wrapped in the flags of Romania and of her native England and then placed in a marble sarcophagus. The Princess Ileana built a hospital in Bran, she named it “the Hospital of the Queen’s Heart”, which serviced the treatment for wounded soldiers from Brasov after the Red Cross hospital was bombed by American aircrafts. After 1945, the hospital continued to treat people wounded and maimed in the war and the population of the region. Princess Ileana herself cared for patients as a nurse and even operated in the hospital. She continued the work with great efforts until January 1948. Princess Ileana and her family were forced to leave the country by the newly installed communist regime. Ileana moved via Switzerland and Argentina to the United States in 1950, together with her six children: Stefan (born 1932), Maria-Ileana (born 1933), Alexandra (born 1935), Dominic (born 1937), Maria – Magdalena (born 1939) and Elisabeth (born 1942. At the same time, Archduke Anton returned to Occupied Austria to save what he could of his war ravaged estate. In the United States, Princess Ileana provided for herself, her children and their education through proceeds from lecturing on her life, Romania and Communism.

Bran Castle was transformed by the communist authorities into a museum. The museum had three departments: the Castle – which contained pieces of royal heritage; the medieval customs; and Ethnography – that included traditional houses in the park near the castle.

In September 1990, Princess Ileana, who since 1961 lived in a convent and was ordained as Mother Alexandra, visited Bran Castle and witnessed the damaged buildings and loss of some of the inter-war construction. She died shortly after, on January 21, 1991, and was buried in The Orthodox Monastery of Transfiguration Elwood City, Pennsylvania, which she founded and of which she was the abbess. In her grave was placed a small box containing earth from the foot of Bran Castle, collected when she was exiled. The castle’s restoration works, which had started in 1987, were finished. The Castle was reopened as a museum and was reintroduced into the tourist circuit. On May 18, after several years of legal proceedings, the castle was legally returned to the heirs of Princess Ileana of Romania and Archduke Anton of Austria. However, the Romanian Government, through the Ministry of Culture, provisionally administered the castle for another three years. On June 1, 2009, the Castle fully re-entered the possession of its legal heirs, Archduke Dominic, Archduchess Maria Magdalena and Archduchess Elisabeth.