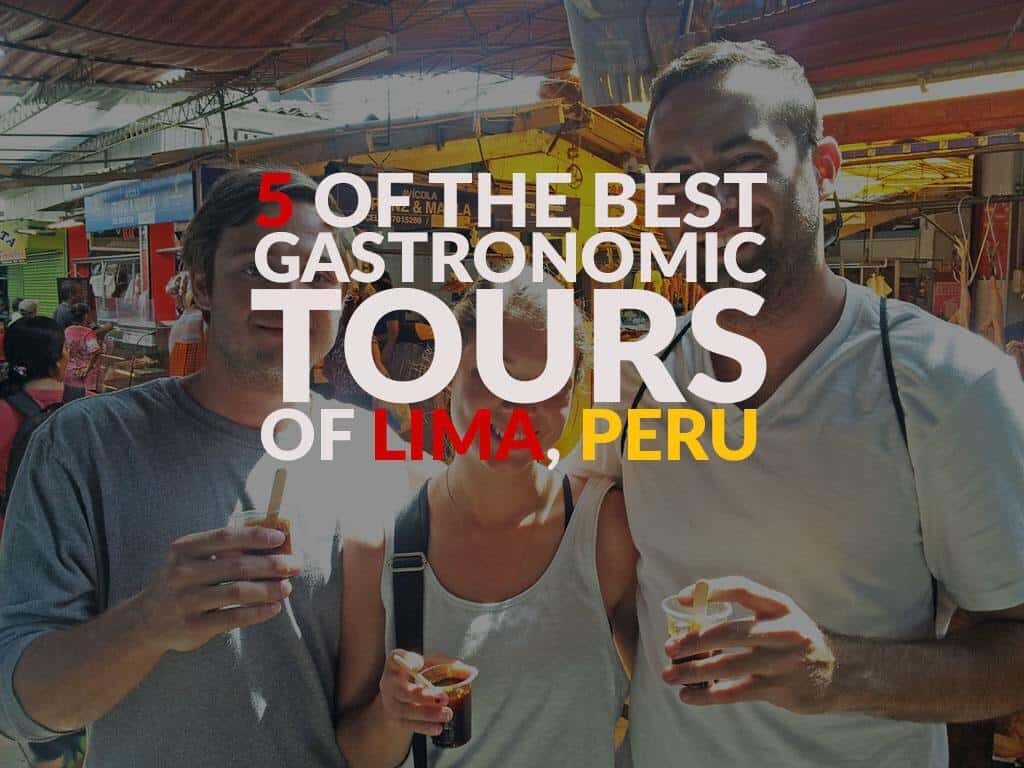 Where to Find The Best Food in Lima

Where to Find The Best Food in Lima

In recent years, Peruvian restaurants have popped up everywhere from San Francisco to Singapore. At the same time, the city of Lima has emerged as one of the world’s most exciting foodie destinations, even boasting three eateries on San Pellegrino’s much-ballyhooed World’s 50 Best Restaurants list in 2016, tying with Copenhagen, London, Mexico City and New York City for the most listed establishments in a single city.

But you don’t have to shell out hundreds of dollars on a lavish multi-course meal to eat well in Lima. These days, you can find phenomenal food ranging from simple ceviche to experimental elevated edibles, and everything in between. Here are some of the most interesting restaurants in the city to enjoy a quality meal, presented below in alphabetical order.

1. ámaZ
It might have been Peru’s unmatched seafood that first brought the country’s cuisine international notice, but these days, it’s the unique foodstuffs coming out of its vast Amazonian hinterlands that are garnering the most attention. That’s thanks in part to the ministrations of Chef Pedro Schiaffino, whose obsession with jungle-sourced ingredients has captured the imagination of chefs throughout South America. He creates wondrous tasting menus at his fancier restaurant Malabar (also featured below), but the casual fare at ámaZ, his second restaurant, is a bit more accessible, and affordable.

The restaurant is split into two sections — a bright, festive front dining room and bar, and the moodily lit back dining room, up a short flight of stairs, whose semi-private booths feature wooden frames resembling traditional fishing traps. The menu contains a cornucopia of tropical treats. Start with the giant Amazonian snails (churros, as they’re known, below) stewed with turmeric, chorizo, spicy chilis and tapioca and served in their own shells. The whole-cooked paiche (a kind of enormous catfish) with coconut milk, tomatoes, plantains and dende palm oil is also not to be missed. Wash it all down with a selection from the impressive pisco collection or a fresh juice with açaí, pineapple and verbena. Avenida la Paz 1079, Miraflores, Lima, +51 1 221 9393

2. Astrid y Gastón
Gastón Acurio is arguably South America’s most famous chef, with an empire of restaurants and a couple of cookbooks under his belt. His wife and partner, Astrid Gutsche, is a powerhouse pastry chef in her own right. Though you can sample their food across the world these days, come to their Lima restaurant to see where it all began. The restaurant recently moved to new digs in a spectacular historical mansion in the San Isidro neighborhood — you might even find Acurio himself manning the stoves on most nights at the moment.

The menus here are an odyssey through Peru’s singular landscapes, from the plentiful fish and seafood caught off its shores to the ancient crops of the Andes and the myriad mysteries still found deep within the Amazon. It’s worth saving up for one of the tasting menus here to enjoy dishes like the signature Peking guinea pig — a great spin on cuy, one of Peru’s national dishes — or slow-cooked tempura egg with lobster and scallops marinated in coriander and adorned with pistachios and vanilla. A meal here is one you’ll be talking about for the rest of your life. Avenida Paz Soldán 290, San Isidro, Lima, +51 1 442 2777

3. Central
Lima’s top entry on San Pellegrino’s list — it’s #4 this year — is this sophisticated spot in Miraflores from one of the country’s most dynamic young chefs, Virgilio Martínez Véliz, the subject of a recent Chef’s Table on Netflix. Through menus of original and inimitable dishes, he brings guests along as he explores the country’s abundance, from the Pacific waters to the Andean heights and the Amazon rain forests.

The heart of the restaurant is a concept called Mater, where the dishes are inspired by Martínez’s own hands-on travels throughout Peru learning about pre-Columbian crops and agricultural methods still cultivated today. He envisions it as a journey of discovery where cuisine, nutrition, history, anthropology and geography intersect. Case in point: a dish titled “Desert Plants” that incorporates cacti, sweet potato leaves and Peruvian heirloom crops like huarango and loche. Another, the “Lofty Andes” is an intriguing composition of heirloom potato, tangy tree tomatoes, lean alpaca meat and Andean mint that’s like an edible prism of mountain living. If you can’t get a reservation at Mater, try for one at the more casual Bar instead. The menu is more limited, but the ambiance is relaxed and fun — the food here is still quite refined and current specialties include a dish of roasted Peruvian avocado with tree tomatoes, red kiwicha grains from the Andean highlands and black butter; as well as duck smoked in coca leaves with several kinds of quinoa, pijuayo (a palm fruit) and airampo, purple prickly pears. Calle Santa Isabel 376, Miraflores, Lima, +51 1 242 8515

4. Isolina
Right in the heart of bustling Barranco — Lima’s bohemian nightlife district — in a 1906 mansion around the corner from the famous Bridge of Sighs, this convivial family establishment somehow manages to tread the line between having a well-deserved reputation for excellent food yet remaining non-touristy. The downstairs dining room is the more casual space, with a bar at the back and a mix of high-tops and dining tables. Upstairs is more straightforwardly restaurant-like, but without the fun people-watching that being on street level affords.

Come with a group of friends because the portions here are quite generous and meant to be shared with the whole table. Chef Jose del Castillo’s family owns the popular, long-standing La Red cevicherias in Lima, and he named this newer restaurant after his mother — it’s no wonder the menu is filled with nostalgic staples, including several dishes where the main protein is organ meat (think cow-brain omelets and tripe stew with blood sausage) and offal. That said, there are a few less-daring dishes you can retreat to if you’re not up to the challenge. The ceviche is simple but delicious, served with fried octopus chicharrones and crunchy choclo corn kernels along with a hearty dose of Leche de Tigre and fresh-cut onions. The main dish de resistance is a short-rib stew slow-cooked in an earthy cilantro sauce with rice and beans on the side. Definitely order the ceviche with octopus chicharrones pictured below. There’s also a selection of Peruvian beers and traditional chicha (a drink made from fermented corn) to wet your whistle. Avenida San Martín 101, Barranco, Lima, +51 1 247 5075

5. La Mar
Once you’ve tried Astrid y Gastón, it’s time to make a reservation at the founder’s other, more laid-back seafood eatery, La Mar. It’s only open midday, so on weekends, there’s no better place to people watch as the city’s well-to-do drag their whole families along for a leisurely lunch of ceviche in manifold variations. Start with a light tiradito (fish crudo) like the grilled tuna belly drizzled with honey and tumbo (a kind of passion fruit). The causas (mashed yellow potato cakes) come heaped with fresh ingredients like crab, shrimp, avocado, egg, rocoto chilis and yellow-chili aioli. There are also tons of options if you want something from the raw bar or the grill, as well as smaller dishes to pick at like grilled octopus anticuchos, or skewers.

Save room for the main attraction, the ceviche, though. You can choose from the catch of the day, cabrilla (a type of sea bass), or sole. Try it Japanese-inflected Nikkei-style with tamarind, bonito and Leche de Tigre (dubbed “tiger’s milk,” this is a heady potion of citrus, lime juice, salt and chilis), or mixto, tossed with other seafood and Leche de Tigre. Make sure you call ahead to reserve a place on the open-air patio, the most popular spot in the restaurant. Av. La Mar 770, Miraflores, Lima, +51 1 421 33 65

6. Maido
One of the biggest historical influences on Peruvian cuisine came in the form of significant waves of Japanese immigration in the 19th and 20th centuries. Since then, Asian flavors have made their way into the mainstream, and you can now find them on menus throughout the country. Nikkei cuisine, a particular strain of Peruvian cooking, is a distinct fusion of South American and Japanese traditions and techniques, and nowhere is it better exemplified than at Maido, opened in 2009 by Lima-born chef Mitsuharu Tsumura. The dining room is quite dramatic, set a floor up from the street. Guests are greeted with a cacophonous “Maido!” welcome from the staff behind the sushi counter before being led into the elegant dining room, where ropes hang from the ceiling in an installation that resembles the Japanese flag.

If you have the time and budget, go for the full-on tasting experience. Otherwise, the a la carte options are also phenomenal. There’s a selection of sushi, sashimi and nigiri, including Paracas scallops with an emulsion of maca root, chalaca-style minced vegetables and cushuro, a high-altitude, edible bacteria. There are also confit guinea-pig gyoza served with ponzu and Amazon peppers, and melt-in-your-mouth grilled octopus with native potatoes, fresh mushrooms, snow peas and tomatoes from Huachipa. The crispy duck confit with traditional Peruvian green rice is a standout among the principal plates, as is the Japanese-style fried rice with mixed seafood, salmon, shrimp omelet and savory ankake sauce. For dessert, or “El gran finale,” as it’s called here, the frio-caliente de chocolate is a decadent dish featuring hazelnut-stuffed chocolate cake, red berries, vanilla ice cream and a slathering of hot Nutella sauce to finish. San Martín 399, Miraflores, Lima, +51 1 446 2512.